Online Lecture Protestants, Print and the Irish Language in the 18th Century 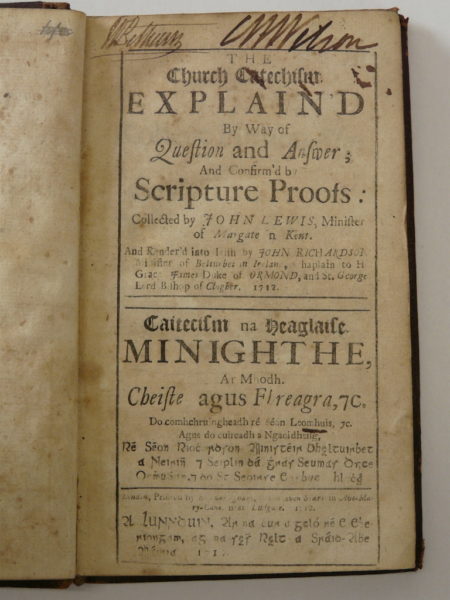 This online lecture Protestants, Print and the Irish Language in the 18th Century will be delivered via Zoom by Professor James Kelly (DCU). At the outset of the period addressed Irish Protestants were largely pre-disposed to look suspiciously upon the language and those who employed it. However, for a combination of reasons, religious and cultural initially, and political later on, this suspicion eased and there was a palpable increase in interest in the language in the final decades of the century. One of those who contributed to this amelioration was John Richardson, a clergyman of the Church of Ireland, some of whose publications are to be found among the holdings of Armagh Robinson Library.

The lecture will be given by Professor James Kelly, Head of the School of History and Geography at Dublin City University. A member of the Irish Manuscripts Commission since 1999 and of the Royal Irish Academy since 2003, Professor Kelly has published extensively on a variety of themes on early modern Irish history, with particular reference to the eighteenth century. This includes Irish and English: essays on the Irish linguistic and cultural frontier, 1600-1900, which he co-edited with Ciarán Mac Murchaidh (Dublin: Four Courts, 2012).

Funded by the Department for Communities, the talk is part of a week of free online lunchtime lectures organised to link with Irish Language Week (Seachtain na Gaeilge le Energia). The series is also designed to highlight Irish language items in the collection of Armagh Robinson Library, during the Library’s 250th anniversary.